Pickleball Takes the Country by Storm

Pickleball is a paddleball sport that was invented during the summer of 1965 on Bainbridge Island, Washington. The game came about in the home of former State Representative Joel Pritchard who, along with two friends Bill Bell and Barney McCallum, improvised for their bored children after failing to find the shuttlecock for Badminton.

Pickleball combines elements of ping pong, tennis, and badminton. Two, or four, players use solid paddles made of wood or composite materials to hit a perforated polymer ball, similar to a Wiffle ball, over a net. The size of the court is about half the size of a tennis ball court, at 44 by 20 feet for both doubles and singles play.

Pickleball is very popular at Friendly Acres RV Park, as well as everywhere else in the United States, and Canada. In 2014, NBC hailed pickleball as the “fastest growing sport in America.” 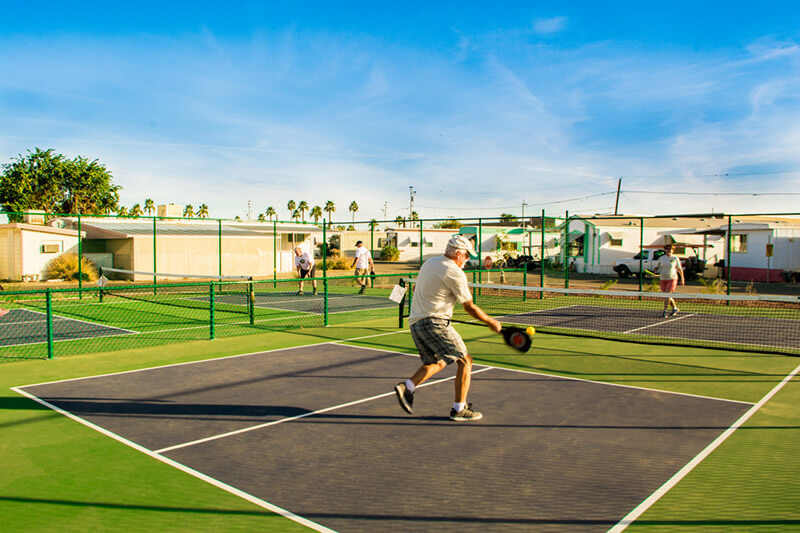 How the Game is Played

The ball is served with an underarm stroke so that contact with the ball is made below waist-level in an upward arc. The server hits from behind the baseline on one side of the center line, aiming diagonally to the opponent’s service court, similar to tennis.

Points can only be scored by the serving side and play ends for a point when one side commits a fault. The first side that scores 11 points leading by at least two points wins the game. If the two sides are tied at 10, the side that goes ahead by two points wins.

What’s in A Name?

The sport got its name after Pritchard’s wife, Joan Pritchard, who had said that it reminded her of the Pickle Boat in crew where oarsmen were chosen from the leftovers of other boats.

Although pickleball is a game with an unusual name, it’s fun to play and easier to learn than other court sports, having a greater appeal to people of various ages and skill levels. Book your stay at Friendly Acres RV Park now and you’ll discover that there are endless on-site activities to keep you fully active and entertained.